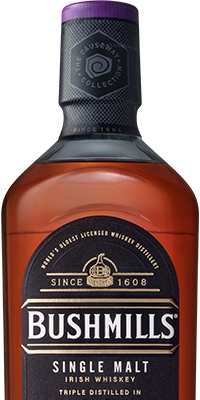 RARE AND LIMITED, ONLY 2,502 BOTTLES OF THE 1995 MARSALA CASK ARE AVAILABLE. EXCLUSIVELY RELEASED FOR THE ISLAND OF IRELAND.

Just a stone’s throw from the distillery, the Giant’s Causeway has inspired us for centuries. Its extraordinary hexagonal columns form a series of steps, much like the expressions in this Collection. This 1995 single malt is a bold new footstep for Bushmills, one that not only honours the giants and generations before us but also the incomparable natural landscape in which it’s forged.

After maturing for over 10 years in oloroso sherry butts and bourbon barrels, this exceptional whiskey was finished in rare Marsala casks sourced from the island of Sicily.

These casks carry succulent spiced fruit notes and the brown sugar sweetness characteristic of this dark sweet Marsala wine. And where others might recask their whiskey for just six months or so, we’ve added deeper waves of flavour by maturing ours in these Marsala casks for a further 15 years.

The extra time taken to finish this whiskey gives it a rich dried fruit character and sherry complexity. Black coffee follows with a warming ginger finish. It’s a sensational whiskey that stands with the best of Irish single malt, a giant in its own right.

Rare and limited, only 2,502 bottles of the 1995 Marsala Cask are available. Exclusively released for the island of Ireland.

Full-bodied with an intriguing aroma of dried fruit, spices and charred wood notes

Forged in the Footsteps of Giants

Watch now
Buy A Bottle Find Near You